Icky sticky biofilm. What is it? How do you get it? How do I know if I have it? And what can I do about it? 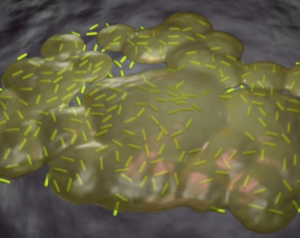 Biofilm is a collection of microbes that adhere to a surface, enclose themselves in a sticky protective coating called an extracellular polymeric substance (EPS) matrix, and are surrounded by an aqueous solution or fluid. The purpose of the microbes forming the biofilm is to protect themselves from hostile environments such as antibiotics, herbal antimicrobials or human immune cells.

These biofilm-forming microbes may be bacteria, fungi, algae, archaea, or protozoa. They can form colonies of the same species, or they can join forces with other species for greater protection.

Biofilms can form on multiple surfaces including wood, metal, glass, or even inside your body. Examples of biofilms include the slime inside your fish tank or on a pebble you pick up from a stagnant pond, the plaque on your teeth, or the kind you can’t really see that forms inside the body such as on bone, on heart valves, in the urinary tract, or in the gut ( which will be the focus of this article).

How do you get it?

The ability of microbes to form biofilm is pretty universal. It’s innate to the microbes. It’s just what they do in an attempt to create a barrier between themselves and their surroundings.

Think about this. . .if you’re walking down the street and see some shady character heading toward you would you feel more protected if you were alone? Or with a group of people? Probably within the group, right? The microbes take the same approach. They coordinate their efforts, form colonies, adhere to a surface, and bind themselves together to create a defensive barrier that protects them from other species, herbal antimicrobials, antibiotics, and even your own immune system. This is one mechanism by which they protect themselves and make themselves more resilient against attack.

Sometimes the biofilm will form across a particular species of bacteria. Other times the bacteria will recruit different species such as Candida to join their group. Either way, when bacteria are faced with a threatening situation or environment, they have a choice. They can either remain alone to fend for themselves, or they can form biofilm.

If we were to look at a common finding in chronic infections of the gut, we might find that the Candida and bacteria layer on top of each other forming a thick sticky coating (EPS matrix) to protect themselves within the gut. That way, if the person were to take antibiotics or botanical antimicrobials, they would have a much harder time penetrating the biofilm and the microbes would have a greater chance of survival. In fact, some biofilm may be so effective that it actually makes an infection resistant to treatment.

How do I know if I have it?

There are apparently some very fancy methods used to test for or detect biofilm. However, if you treat a gut infection and it doesn’t resolve, it is possible that you have biofilm. If your infection is chronic, it likely involves biofilm. If you know you have both a bacterial overgrowth and a fungal overgrowth (such as SIBO + Candida/SIFO), it is possible that you have biofilm. Another thing that may clue you in to consider biofilm as part of the equation is when you see chronic sinus issues along with the gut infections.

But this is something really important to point out: It’s not so much that some people have biofilm and others don’t. It’s more about deciding when intervention is required to break down the biofilm in order to treat the infections or overgrowths.

What can I do about it?

Many common foods help break down biofilm. But for the resistant gut cases, it’s probably wise to just go for the heavy artillery. There are several supplement formulas on the market that are classified as biofilm disruptors.

Biofilm Defense by Kirkman is an enzyme based formula that is designed to eat up the biofilm. It is most effective when taken on a truly empty stomach. Otherwise the enzymes will just eat the food in your digestive tract.

Similarly, Interfase by Klaire Labs works by pulling apart the biofilm to expose the microbes but with the added ability to degrade the microbial cell walls.

A step up from that would be Interfase Plus, also by Klaire Labs. This is the Interfase formula with an addition of EDTA which binds to the calcium, iron and magnesium needed to form the biofilm.

Certainly there are other biofilm disruptors available on the market, but these are some examples of widely used formulas in the natural health field.

What else do I need to know?

Treating biofilm alone will not eradicate gut infections. Biofilm disruptors are intended to be used to do just that, disrupt the icky sticky biofilm. You must then go in with an antimicrobial to reduce microbial counts, whether they be bacterial, fungal, etc.

And. . .as always, this process is best overseen by a health care professional who is familiar with this type of program.